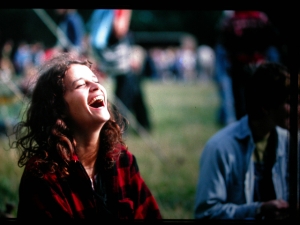 I had some questions: what did I mean with the Best years of my life.

The Best Years of my life started three years after I moved to Amsterdam.
The day after my 21st birthday (1975) the door bell rang and two women stormed up the fourth floor where I lived and asked my girlfriend Meggie,(I had met her at a MELANIE concert,) if she wanted to join their BIG MAMA’S BLUES BAND as a guitarplayer.
We befriended the couple.

We didn’t come out to them, my girlfriend was only 17 and in those days it was still an offense for a woman to be with a minor of the same sex.
The two were totally into Dykeland, they knew the place where lesbians met (only one: De Lange Gang) and they even scored their delicacies from a lesbian.
My friend was kicked out of the band and we lost our friends, only to meet them again, half a year later, in the squatted Womens House. By that time my girlfriend and I were breaking up so I came out to one of them. This woman is still one of my best friends.

And then my life started again.

Every Thursday there was a Jam session in the Women’s House, Dees and Lido were the bartenders and you could find me there every Thursday drinking my coke from the bottle, like we all did.

It was the BEST and the friendship BLOOMED and is still Blooming.
Sadly enough we lost Dees four years ago.

And the Best years of my life ain’t over yet.

One thought on “>The Best Years Of My Life”